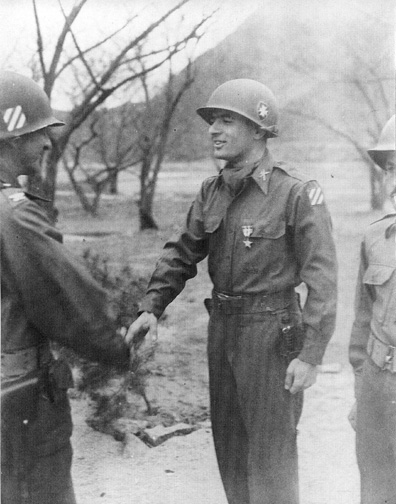 FIRST LIEUTENANT PASQUALE J. CONTI, 0133993, Infantry, Company "F", 65th Infantry, 3d Infantry Division, United States Army. On 23 December 1951, the Second Platoon of Company "F", led by Lieutenant Conti, was assigned the mission to provide supporting fire for Company "G" in an assault on enemy held Hill 200 near Sangnyon-Myon, Korea, with a secondary mission of assaulting the hill. Due to the intense hostile fire, the assault unit was effectively pinned down and unable to advance further. Upon the order to throw his platoon into the assault, Lieutenant CONTI promptly moved his men forward. Almost immediately subjected to concentrated hostile automatic-weapons, small-arms, and grenade fire, he fearlessly placed himself at the front of his platoon and by his outstanding leadership, his brilliant scheme of maneuver, and his daring initiative he inspired his men to accomplish their mission. Although wounded during the course of the vicious battle he refused to be evacuated for medical attention and continued to direct the fire of his men. When the fanatical foe regrouped for a counterattack Lieutenant CONTI accurately directed friendly artillery fire on the massed troops and effectively disrupted the enemy threat. When the order came to withdraw he successfully covered the withdrawal of his unit, although suffering from the loss of blood. Lieutenant CONTI'S gallant and unwavering determination reflect the highest credit upon himself and the military service. Entered the Federal service from New York.