AWARD OF THE BRONZE STAR MEDAL. - By direction of the President, under the provisions of Executive Order 9419, 4 February 1944 (Sec II, WD Bul 3, 1944), and pursuant to authority in AR 600-45, the Bronze Star Medal with Letter "V" device for heroic achievement in connection with military operations against an enemy of the United States is awarded to the following-named officer:

Chaplain (Captain) VINCENT J. BACON, 0987639, Chaplains Corps, Headquarters and Headquarters Company, 65th Infantry Regiment, 3d Infantry Division, United States Army. During the night of 14 June 1953, in the vicinity of Saginak, Korea, a Company "E" raiding party was subjected to intense enemy bombardment upon nearing its objective and sustained many casualties. Chaplain BACON was on the main line of resistance when the first returning wounded neared the United Nations positions and, disregarding the incoming enemy fire, he bravely rushed down the safe lane to assist the casualties to safety. Moving among the wounded men, Chaplain constantly offered words of encouragement and gave them spiritual comfort. Observing a number of Korean Service Corps personnel, he immediately organized them into litter teams and directed them in the evacuation operation. He personally carried several United Nations casualties up the slope and was instrumental in the expeditious movement of the wounded personnel to aid stations. Chaplain BACON'S outstanding heroism and devotion to duty reflect great credit upon himself and the military service. Entered the Federal Service from Rhode Island. 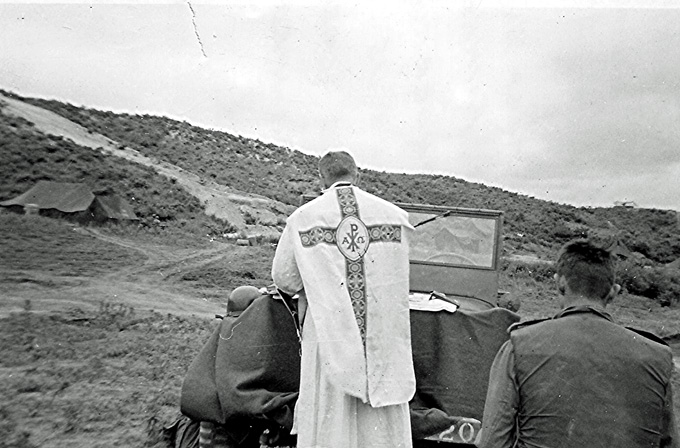 This photo was submitted to this site by James E. McCarthy.