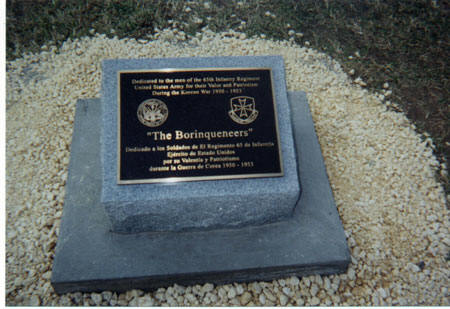 The Borinqueneers Monument at El Morro - Photo by Efren "Pete" Hoyos
Dedicated to the men of the 65th Infantry Regiment
Untited states Army for their Valor and Patriotism
During the Korean War 1950 - 1953
"The Borinqueneers"
Dedicado a los Soldados de El Regimento 65 de Infanteria
Ejercito de Estados Unidos
por su Valentia y Patriotismo
durante la Guerra deCorea 1950 - 1953
Homage to Puerto Rico's Fighting 65th
by Lt.Col. Carlos Luís Rivera & Miguel José Hernández
Listen " mi gente" and lend me your ears,
While I tell you the story of our brave "Borinqueneers"
T'was the middle of August of Nineteen-Hundred-Fifty
When they boarded a ship; they called it "Marine Linx-y."
"De la Isla del Encanto" they had to depart,
Once again into battle, the 65th of brave heart
In First War and Second they answered the call,
now to far off Korea, to fight and give all.
In port of "Pusan," they boarded North train
and as it left station, Commies poured like the rain.
From Harris the order, Boricuas, on guard !
The men they responded, the foe was hit hard.
It was frozen in "Chosin" when Marines told; withdraw !
and only good faces were the "Ricans" that they saw.
Blocking Chi-coms pursuing U.S forces to shore
were Boricuas, brave lads of legend and lore.
For off to the battles they fought many times,
over rivers and hills in Korea's cold climes,
and one most remembered was the bayonet charge
When 65th legions slew the Chinese so large.
So many more kills by the Regiment's pride
Including injustice, which they tossed aside.
DSCs, there were four, Silver Stars by the score
Decorations "sin" numbers on their uniforms wore.
And thus do we gather in "Viejo San Juan"
To pay homage to those who fought in "Chorwan."
And in many places, whose names few can tell
But know this for certain; seven-hundred-forty-six fell
The "Arce" in Arlington; the "Ceiba" in San Juan
Shall ever remind us of their great elán.
So close we our homage with warm, grateful hearts
With tributes and honors to men of these parts.

The 65th Honor Task Force is a coalition of veterans associations from
around the nation, Government of Puerto Rico, Advocate for Veterans Affairs,
Puerto Rico, Veterans, Families, Community Leaders, and former members and their families of the 65th Infantry Regiment.

In ancient times, warriors were selected to safeguard the primary flame that alighted all of the other torches from extinguishing.  During their vigil they recounted the events of the previous days battle recalling their fallen comrades.  It is in this sacred tradition of "keeping the flame" that the 65th Honor Task Force is dedicated.  The Torch has now been passed to us and to you for safe keeping. Together we will keep the flame alive and pass on that torch to the next generation so that none ever forget their solemn sacrifice for our liberty. The 65th Infantry Regiment of Puerto Rico holds the unique distinction of conducting the last battalion sized BAYONET Charge in US MilitaryHistory. They counterattacked a fanatical and overwhelming enemy in what became one of the most dramatic and desperate battles of the Korean War.  Their valor, courage and indomitable spirit became legend in the annals of warfare.  Their war record is second to none.  They are heroes, a national treasure, and belong to all of us.
This ceremony will honor our fallen heroes.  We endeavor to assemble as many veterans, families and patriots we can in the coming weeks at El Morro in Puerto Rico.  We are seeking support and welcome donations from people of good will to help us transport our surviving veterans to attend this ceremony honoring them, their unit and fallen comrades.  Support in the form of a plane ticket for a veteran and his spouse is welcome from all people and corporations of good will.  Please attend or help us transport a veteran to this historic event.