.News from the Korean War

PAGE 2 - 1951
PAGE 3 - 1952
PAGE 4 - 1953
65th Infantry Regiment
October 8, 1950
Puerto Ricans Now in Korea
Korea- The 65th Infantry Regiment a unit of Puerto Rican troops with a history dating back to the time of President William Mckinley,is now on duty in Korea. Authority for the first body of native troops was contained in legislation enacted in 1899 after which the "Puerto Rico Battalion of Volunteers of Infantry" was organized. In 1920 it received its present name. Early in World War II, the 65th was stationed in Panama but after a combat infiltration course at Fort Eustis, Va.
sailed for North Africa and went to France in September 1944. The regiment was awarded battle participation credits in the Naples-Foggia, Rome-Arno, Central Europe and Rhineland campaigns.
The regiment was stationed in Puerto Rico until its recent assignment in Korea.
October 30, 1950
Fighting 65th RCT Hits
Isolated Enemy, Mops Up
By William Burson
With 65th RCT  (UP)-
Puerto Rican soldiers of the 65th Regimental Combat Team, engaged in a "maximum-effort" mop up of bypassed North Korean troops, straddled the hub of the main northward escape routes being used by the stranded enemy here  Saturday.
Col. William W. Harris, commander of the reinforced 3rd Division regiment now attached to the 25th Division, deployed his units along a new 32-mile-long perimeter extending from the Kum river north-west of Yongdong to Kumchon on the southeast. Patrols of platoon and company strength probed the mountains in all directions to flush all remaining enemy remnants from
their hideaways in the wilderness of central South Korea.
The 65th, which with the exception of a few American officers is composed exclusively of Puerto Ricans - transferred the center of its operations from Kumchun after coming into possession of maps detailing the escape paths employed by North Koreans attempting to slip northward to the Manchurian border. The charts were taken from a recently captured enemy officer and showed Yongdong to be the center of planned escape routes which roughly resemble a giant "squid."
The combat team arrived in the theater on Sept. 23, too late to participate in the Inchon invasion, and was assigned to a major role in neutralizing behind- the- lines enemy resistance. Moving in behind northward- of the United Nations forces, the Puerto Ricans saw their first action near Chanynyong on Sept. 29, when a patrol was ambushed and one man was killed and three
wounded. Since Oct. 9 they have been in daily contact with North Korean elements with some units in large scale encounters with as many as 500 enemy troops.
To date the combat team has killed 105 North Koreans and bagged 887 prisoners. Puerto Rican casualties for the same period have been 17 killed and 30 wounded.
Debarking at Pusan the 65th proceeded to its present sector by way of Sammangjin, Waegwan and Kumchon. The troops encountered and neutralized enemy pockets along the route.
The principal action enroute was fought on Oct. 4, when a company was sent to the rescue of a U.S. Army radio station on Hill 585 under attack from Red guerrillas.
Since arriving in the Kumchon-Yongdong area the combat team has been
hit in force twice. Both times Company E of Lt. Col. Herman Damner's 3rd Battalion was the unit besieged. On Oct. 13, 500 Reds pounced on the Easy Company shortly after nightfall in a breakthrough attempt and ammunition was rushed in and the attack was neutralized. The same company's kitchen was struck by a group of 90 foraging Koreans on Oct. 17. A hastily organized platoon of kitchen personnel counter-attacked and killed or captured every North Korean in the group.

Nov 7, 1950
Puerto Ricans Fight On Northeast Front
AT NORTHEAST FRONT
NORTH KOREA  (AP)--The 65th Puerto Rican Regiment is in Wonson on the northeast front, tenth corps spokesman disclosed Tuesday. He said the Puerto Ricans beat back a probing attack at Yonghung, 30 miles north of Wonsan.
Meanwhile the U.S. Marines smashed a series of Chinese counter-attacks and battled slowly but steadily forward through canyons in the mountains below Chosin. The spokesman indicated gains in the bloody battle were being measured in yards because of determined resistence.

A PATROL OF "C" COMPANY, 65TH Infantry Regiment returns to camp with enemy guerrillas
captured by the Puerto Ricans on outskirts of Yong Hung.

One United States dependency, little heard about from a publicity standpoint, is the largest and most vastly populated of all-Puerto Rico. But things started happening a couple of weeks ago that changed all that. First, Communist groups in the capital city of San Juan, led an uprising
against the duly elected Government. Then to show they meant bussiness in their hostility toward the U.S. , this same group directed sympathizers in America to assassinate President Truman. The plot failed as did their revolt.
These were all headline items that brought the West Indian island into focus. But the Puerto Ricans did something else previous to this same hectic time that didn't receive much publicity. The 65th Infantry Regiment, U.S. Army, made up largely of native Puerto Ricans, landed in Korea to join forces with other UN troops. This well-trained regiment is not new to the Army, however, and their unit history indicates that their presence in the snow covered hills of North Korea sounds another ominous note for Communist aggressors.
Organized shortly after the annexation of Puerto Rico following our war with
Spain in 1899, the 65th Infantry Regiment was first known as the Puerto Rico Battalion of Volunteers Infantry. Following several name changes and enlargements, including a battalion of mounted troops, the regiment finally became a part of the Regular Army by an Act of Congress on June 16, 1908 and was again renamed, the Puerto Rico Regiment of Infantry, USA. The first official act after becoming a member of the regular establishment was an inspection by the then Eastern Department commander, Gen. Frederiek - D. Grant, who afterward addressed the assembled troops. He stated, "This is one of the best regiments I have ever seen and there are few as good and none better under my command." Of this the 65th has remained proud and endeavored to maintain the same standard of efficiency up to the present date.
The regiment was brought up to full battle strength in May of 1917 and ordered to the Panama Canal, where it remained during the first World War, protecting that vital installation. June 4, 1920, found the soldiers back home on their Caribbean island under their present name- 65th Infantry Regiment. They remained at their home station during the interim of great wars and it wasn't until the early part of 1943, that they again took up security positions in Panama. From Pearl Harbor until that time, they patroled every inch of their homeland in anticipation of an
expected invasion.
While in the Canal Zone, intensive jungle training was given to the troops when they could be spared from the posts. Although they never has occacion to become engaged in jungle fighting, they were nonetheless prepared.
Later that year the 65th left the Zone and was shuttled to Fort Eustis, Va. where the men took advanced Infantry training, and then sailled for North Africa. After landing at Port Aux Poules, more training followed, this time in amphibious tactics. Then on to France and Marseille. Their first commitment to action was in the Maritme Alp region at Peira Cava This short campaign resulted in 47 battle casualties. Then came patrol duty and security missions in the Kaiserlantern-Manheim sector of Germany . This was March, 1945. V-E Day found the fighting Puerto Ricans deep in the heart of Germany and in looking back over their route of advance they had won battle participation credits at Naples Foggia, Rome-Arno, Central Europe, and Rhineland campaigns.
While alerted for further action in the Pacific War, the signing of the Japanese surrender caught up with them and they were returned home to San Juan in November, !945.
In the last five years the 65th Infantry has been anything but asleep. It has trained extensively, participating in war games and joining in frequent maneuvers.
A Maltese cross predominates the coat of arms of the 65th. The significance
of this ancient Christian symbol dates from early Puerto Rican history, when at the time of the conquest of the island by the Spanish in the 15th century the city of San Juan was named for the military order of St. John of Jerusalem. This order was later renamed the Knights of Malta, their dress being a black robe with a Maltese Cross.
The regimental crest of a wreath of colors with a rampant lion, was taken from the coat of arms of Ponce de Leon, the island's first Spanish governor.
The UN forces in Korea will find the men and officers of the 65th a ready and willing ally. They carry with them a tradition and they aim to uphold it. Puerto-Ricans are brawny fighters and they appreciate their stake in preserving the freedom of a democratic world. 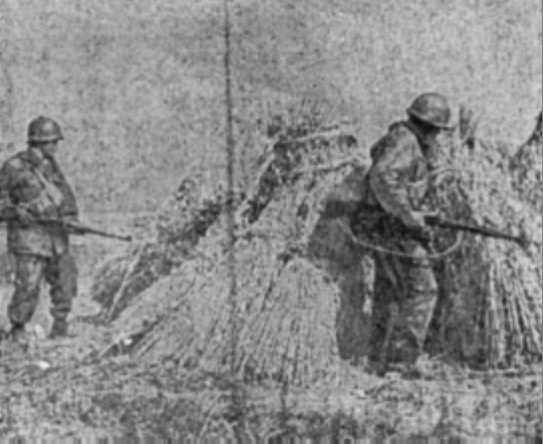 
December 27,1950
Puerto Rico Unit Lauded
For Bravery at Hungnam
By JOE QUINN
SOMEWHERE IN SOUTH KOREA  (UP)-Puerto Rico's youthful 65th Infantry Regiment which distinguished itself in combat against the Chinese Communists on the Hungnam perimeter arrived at a southern port Tuesday.
The first and third battalions were due to debark from the U.S. General H. B. Freeman Wednesday. They will join other elements of the 3rd U.S. Division pending assignment to their next mission.   Capt. George F. Ammon, of Vicksburg,Miss. who has commanded a company of the 65th for two years, said the youngsters "crowned themselves with glory and proved themselves a well trained combat unit" in their baptism of fire on the frozen northeast coastal front.  "They were a well-disciplined outfit with that- devil-may-care attitude,"
Capt. Ammon said. "When they were sent to drive back the Chinese they moved out aggressively and carried the fight to the enemy every minute. When they were on the defensive they stayed in their foxholes even when their positions were overrun and picked off the commies with the coolness and precision of seasoned veterans."